“as the overarching story line is simplistic, Neverlake attempts to push depth on us through confusion. The scenes are often disjointed and don’t connect in any meaningful way until much later. To further exacerbate this issue the narration by Jenny partially brings about a tone of importance and significance that is self imbued. It’s as if the movie is proclaiming itself to be of great depth and importance without the consent of the audience.” – 2.9/5 (genre)

Neverlake is very much like the Lake of Idols around which the movie centers, seemingly simple and obvious on the surface, but actually deeper and murkier than one would expect. This movie is a slow burn, probably one

of the most steady paced movies I’ve seen in some time. It prods along revealing piece by piece, making it seem obvious to us what is happening and what is going to happen, and then changes direction. These shifts in direction are sudden, and yet somehow are dampened by the tone and atmosphere to feel almost lackadaisical.

This movie is most definitely murky, as the overarching story line is simplistic it attempts to push depth on us through confusion. The scenes are often disjointed and don’t connect in any meaningful way until much later, by which time you’ve likely already figured out what’s going to happen and why. To further exacerbate this issue the narration by Jenny, while quoting poetry, partially brings about a tone of importance and significance that is self imbued. It’s as if the movie is proclaiming itself to be of great depth and importance without the consent of the audience. Essentially it takes itself far too seriously.

Neverlake is about Jenny Brook (Daisy Keeping), a girl who was born in Tuscany but

then after her mothers death was sent to live with her grandmother in England and her father remained in Tuscany. Jenny is now a student in New York city but has come back to visit her father in Tuscany, returning for the first time since she was a child. Her father Dr. Brook (David Brandon) has spent most of the last 20 years researching the nearby Lake of Idols, a real place where Etruscan’s performed rituals. I won’t go into much detail about this, if you’re interested some info can be found here. Immediately upon her arrival her father begins to act peculiar, and Jenny meets Olga (Joy Tanner) one of her fathers former colleagues who lives at his house with him. Olga is an interesting character as she is very standoffish towards Jenny, then down right mean to her, and then somehow manages to seem as if she cares. There’s a definite “You’re not my mother” vibe going in the background, but as I said it’s a slow burn and this doesn’t make it to the light of day until much further in than one would expect.

Jenny herself is very interested in the lake, but no matter how much she prods her father she can’t seem to get any real information out of him, and his almost constant absence doesn’t help. She goes to the lake herself where she has an encounter with a blind girl who says she’s from a place where there are other children. Jenny assumes she means an orphanage and upon request escorts the girl, Malila (Eva MacCallum), 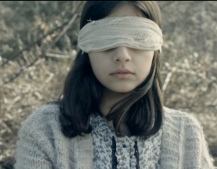 back to the orphanage/hospital. She meets several other children there and develops a relationship with them as she comes by nearly everyday to read to them from different books. Even though it is apparent that something is off about this group, and by that I don’t mean their physical injuries, Jenny seems quite content to visit them when she can.Even after the eldest, Peter, takes her upstairs into a room in the dark by themselves and begins to suggest that he may be evil. Personally, I think at this point I might cut my losses and jump ship, but I’ll give credit to Jenny as she sticks it out. From here she becomes embroiled in essentially a battle against her father and Olga to help the children by doing the things they request of her, such as retrieving idols that were taken from the lake by her father.

Oh, and there are spirits living in lake. And judging by the looks of one of them I’d say she was Medusa in the spirit. This actually brings up my first point of complaint: All this focus is put into the lake, with cutaways to it and random short visits by the characters, but despite the ritual part it plays the lake is really only a minuscule portion of the story.

It seems odd to name the movie Neverlake, include a famous lake such the Lake of Idols and then relinquish the mystery and intrigue of said lake to the somewhat ghoulish, one could say, acts of Dr. Brook and Olga. The spirit parts are like an after thought which gets forefront attention in the last 30 seconds.

Jenny herself is an interesting character to watch develop, although she does so quite slowly as this is the only pace the movie allows, and as such never really reaches her full potential as a lead. She’s intelligent, brave, caring, and observant but she’s none of these things in any overt way. Everything is subtlety in Neverlake; it’s as if the director/writers thought that movies lacked subtlety (a fair assessment) and decided that they would make a movie devoid of overt acts and comprised completely of subtlety. At times it can be infuriating as you really want the movie to either allow you to have the pieces you need to start putting the puzzle together or just shut up about it and move on.

Dr. Brook (her father) and Olga are well devised characters but in such a way that they feel like they came from a mold, or were generated with an algorythm designed to make antagonists. That may be a bit harsh. The children that Jenny meets are very interesting, and have diverse and oft times amusing personalities despite their present predicament. In some scenes with Jenny as they talk with her it almost felt as if I were watching some of the characters from Alice’s Adventures in Wonderland, with each child embodying a character. Since this is one of my all time favorite stories this was a huge plus for the movie. I felt like the children, along with Jenny, were the best part of the movie, and could have been so much more than what they turned out to be with just a little more push into the depths of their character.

This movie is very murky from the first 15 minutes on, and while I’m sure that was intentional to maintain an air of mystery and intrigue it really just served to bog everything down. This had the added side effect of the story never catching any real traction to pull you in, even in the end as it picked up (snails pace or so) it just couldn’t quite find purchase. I even found myself rooting for it to find some footing because I very much wanted to like the movie, as I liked many of the characters and so wanted the story to grab me as well. Sadly this never happens, and your first instinct about what is happening is going to be right, and after all that murky disjointed depth you come right back to the surface. You get what you see.

Some of the shots and choices in direction are very nice, and added very strongly to the permeating ambiance of the film. However, there are jumps and skips that just feel like a needle hoping around on a record, and it’s hard to tell what portion of the track you’ve landed in. Maybe this got scrambled in editing and post-processing, but something tells me this was intentional. If so I would just like to say, please stop, just stop and…stop. Some lead in, any lead in to the scene where Jenny has just undergone surgery would have been wonderful. I felt like I had jumped into another 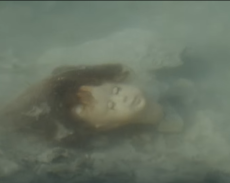 movie with a different story line, apparently one which may or may not be a doctor/hospital based drama. And then we were back with no mentioning of the amount of time that had passed or what real significance it had. One could argue that later, like 30 minutes further in, it starts to stitch together but do I really want to spend that much of the movie collecting tidbits to make an incomplete puzzle because the crucial pieces aren’t being given to me even in fragments. This isn’t a Tomb Raider game, I’m not on a treasure hunt, and I certainly didn’t hop on this ride to be led along at the slowest pace possible to get to an ending I could clearly see without your puzzle pieces. But bravo at hiding said ending behind a curtain of tantalizing possibility that it won’t be that simple.

The ending was, as I said pretty close to my first instinct of what it would be, and was not at all satisfying. It was almost generic and very cheesy, with no sense of impending dread/joy/surprise/excitement, take your pick. Some of us are happy, some of us are dead and some of us are still Medusa, but seemingly pleased with a our role in the killing of aforementioned dead.

Neverlake could have been so, so much more than what we got. It could have been intriguing and mysterious with great characters had someone just pushed themselves a little harder. Instead we end up with a slow paced, mediocre mystery masquerading as a horror movie who’s only saving grace is it’s reliance on other literary works. I wanted very much to like Neverlake, the initial feeling of the movie sets you up for something great and then just throws you off a cliff in delight of its own self proclaimed grandeur.