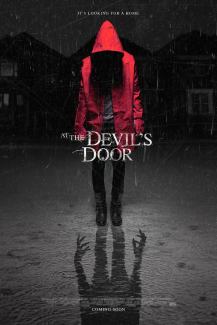 AtDD is simply the Frankenstein’s monster of movies; stitched together parts of so many other movies we’ve all seen far too many times that somehow become just a bit more than the sum of their parts, and present us with a movie we haven’t seen before. The entire movie is like a bout of deja vu that just won’t go away. – 2/5

This movie succeeds and fails at some many things and at so many times. This fact alone warrants at least a modicum of respect, because while I’m certain it was completely accidental, achieving this level of duality simultaneously is no small feet. It is both intense and unremarkable, rehashed and new.

What it is: At the Devil’s Door is a jumper, the over-simplified term for a movie that uses jump scares to keep you interested. The primary problem with this for AtDD is that it is also a slow burn, with long drawn out lead ups to eventful moments which rarely pan out. There are a couple of very good jump scares, but most have such a long runway to them that you see them long before they happen. This issue is even further exacerbated by the sudden changes in what year it is with next to no warning or indication. In fact, it’s incredibly hard to tell at first if it’s 2015 or 1985, seeing as how people dressed pretty much same in both years.

The story: 1987 – A teenage girl named Hannah (after much confusion with everyone calling her Charlene mistakenly for so long) goes to California where she meets a boy she wants to “spend her life with”. He convinces her to play a game with an old man (I believe his uncle) in exchange for $500. After Hannah successful completes the game the man tells her she’s been chosen and she has to tell “him” (not the old man) her name so he’ll know what to call her when he comes for her. 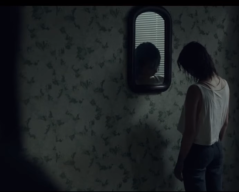 Hannah returns home where strange things begin to happen, the most prominent being that the $500 dollars will not go away. One wouldn’t think this would be a problem but in reality it is, as Hannah is certain she is going insane. Events transpire which then lead us to the present.

2014 – Leigh is a realtor and the current owners of the house where Hannah lived have asked her to sell it as quickly as possible. It isn’t made clear at all that this is an altogether different family than Hannah’s, a purposeful tactic to “throw us off the trail” as it were. It only serves to confuse and infuriate the viewer, or at least this one. While visiting the house Leigh keeps seeing Hannah appear after she touched the scorch marks on one of the doors. Eventually she manages to corner Hannah in her old bedroom which does not go well.

Enter Vera, Leigh’s sister, whom we were only briefly introduced to previously and seemed like she was nothing more than back drop for Leigh. But as it would turn out, Vera becomes the central focus of both the movie and the creature’s machinations. Vera goes from a completely one dimensional character to a complex and in depth character around which the last half of movie focuses on.

Where it succeeds: So it seems only fair to start with where AtDD succeeded. At least one very interesting and compelling character was created for this movie, and played quite well: Hannah (Ashley Rickards). I was actually certain that the entirety of the story would revolve around the story of Hannah and Leigh, and was okay with this as Hannah and her unwanted friend were quite interesting. Ashley Rickards plays Hannah with a cold detachment at first and slowly slips into more and more panic and fear, tempered by moments of “evil” clarity. The juxtaposition of these different personalities make her the most compelling, and well played character. The second more interesting character is the little girl (Ava Acres), without giving away too much, who manages to give the very eerie and creepy vibe that only children can somehow manage. Again the intrigue and depth of this short lived (by that I mean screen time) character is brought out by the acting of Ava Acres.

There are several jump scares that are pulled off successfully, even after essentially doing everything but smacking you upside the head to tell you it’s coming. These were impressive because of this, not so much because of the scares themselves. There are also some very intense moments, most of which involve Hannah, which actually drew me in and made me care about what was going to happen.

The story, while not original, has enough original elements in the way it’s told to be good as well. Nothing that hasn’t already been done is on display here, but the way in which it is presented is somewhat unique for the genre. Oculus is another movie that comes to mind with this style (although Oculus is far outside AtDD’s league). Just a little more care and thought put into the story and this movie could have been something actually unique.

Where it fails: Quite frankly, and oddly enough, it fails at every level in which it succeeds. Two of the four main characters I couldn’t have cared less about, Vera and Leigh. They were never presented in any light that suggested, in the beginning, that I should care about them. They were shown in such a way that I assumed they were basically vessels to bridge gaps in Hannah’s story and keep things moving along

Changing the primary lead three times through the course of the movie, only to settle on the least developed character of the primary cast was an awful decision. There was nothing wrong with acting of Naya Rivera (Vera), and I’d say she is a decent if not good actor, but the writing did not allow for her to really shine. The one exception here is the end where we get some glimmer of character depth. These 30 seconds however are not enough to justify the previous half hour. Also, removing the most detailed and interesting character, Hannah, less than midway through was a poor choice. This was followed quickly by the removal of her successor Leigh, who had at least been groomed to some degree to fill the role.

Probably the two biggest failures of AtDD are the time jumps without warning or explanation, and the complete confusion over Leigh referring to Hannah as Charlene repeatedly. The jumps between present and 1987 are very, very unclear in the beginning and this is the time frame in which the most hopping about occurs. What year you’re in starts to become very confusing. There aren’t even any visual cues to let you know as the clothing and home decor in both eras looks almost identical. It took a bit to sort out how much time had actually passed, who was living in the house, and even that Hannah shouldn’t be in the house anymore. Leigh referring to Hannah as Charlene was of course intentional on the part of the writers as she assumed that girl she was seeing was the daughter of the current owners. Again however, due to random time hops, it isn’t clear that the current owners aren’t Hannah’s parents but the parents of a girl named, you guessed it, Charlene. Far too much time was required to sort out that mess.

And briefly I would like to add that the adoptive mother of the little girl was the most superfluous character I’ve seen in a movie in a long time. You’ll understand when you get there.

The end: The last few minutes of AtDD are actually very good. This is completely the opposite of what I’m used to which is big build up to nothing. Here were got no build to up to something good. The movie finally caught traction on the horror/intensity aspect it had been desperately trying to convey up to this point, with the most intense moments coming from Vera chasing the little girl. It worked really well, as it seemed Vera was the one we should be afraid of, then the little girl, then Vera. This kind of keeping us on our toes is something I think was attempted throughout the movie but really only succeeded at the end. The last few moments were good and the movie ended with a nice level of satisfaction, quite an accomplishment considering the mess that had been made of things throughout. However, quoting Revelations from the Bible is so overplayed that it felt very campy and cheesy. A justification for the movie that wasn’t necessary, as without it there is some mystery to the creature, but with it it’s just plain old Biblical demons playing their games.

2/5 (genre) – In the end it isn’t a great movie, nor is it a terrible one. Decent acting, some original framing of the story, but a lack of caring for the later protaganist and a confusing stitching of the time line. If you like horror, and specifically Biblical related horror then AtDD is worth a watch. Otherwise, I’d find something else.