“If Anguish was the movie that made me jump, The Sisterhood of Night is the movie that made me cry. By time I had reached the last 20 minutes in the movie I was in love with all the characters. The narrative let me understand what they were going through, not on an intellectual level, but on an emotional one. It let me see the world through the eyes of young women who were lost and alone and just needed a safe place, needed someones ‘vow of silence’. ” – 4.3/5 (general)

I wish that I could say everything about The Sisterhood of Night was perfect, but unfortunately that wouldn’t be true, no matter how much I want it to be. The first half of the movie reeks of so many other teen high school girl movies that we’ve seen. Teen angst, petty jealousy and downright cruelty to each other and anyone that gets in the way of what they want. This is compounded by the fact that the movie cannot decide if it is a narrative or a documentary, using both multiple

voices to tell the story and clips from media and “the people involved”. What makes this even worse is that the second half of the movie is nearly perfect in every way, as The Sisterhood decides that it is indeed a narrative being told by many voices, many young women who never had a voice before.

If that’s somewhat confusing, let’s set up the movie. It starts out with a voice over by Mary (Georgie Henley), one of the central characters and founder of the Sisterhood, describing what the world saw of the events that unfolded in Kingston, New York. Now she promises us their side of the story. The intro narration is a bit rough and feels a little forced, which makes it hard to connect to the movie initially, which is a little confounding considering the movie ends on the same narration (different words) but they feel powerful, confident and resonate with you long after the credits roll.

Mary intentionally messes up the audition of another girl, Emily (Kara Hayward), just because she can. This leads to Emily retaliating by stealing Mary’s phone and posting all her texts on her blog, thus upping her followers and humiliating Mary with all that personal information out there. Mary retaliates by spray painting on the wall of a building at school that Emily is a whore. Despite all the seriousness of it, I still laughed when Emily mispronounced the word as “war”, to which Mary replies “a what? You mean ‘Whore’, the W is silent.”, followed by the guidance counselor saying “It is.”. I

feel bad that I laughed at that, but still it happened. After this Mary decides to go offline, and cuts all ties with social media and begins writing by hand in a diary. As she starts however, she is interrupted by a light coming from the house across from her. The light is coming from a neighbor girl Catherine (Willa Cuthrell), and they meet up outside at night. They are joined by another neighbor girl Lavinia (Olivia DeJonge) a short time later and together they form The Sisterhood.

The Sisterhood and what it is, despite being the central focus of the movie, is kept a secret from even the viewer to whom the story is being told until sometime in the last 30 minutes of the movie. I felt like this was a brilliant move, because as the rumors and unfounded accusations begin to fly (thanks to Emily) it 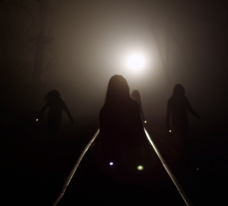 keeps you guessing as to what is really happening when these girls meet each other in the woods at night. The most obvious speculation is that the are witches, and thanks to a post by Emily it’s believed that they molest other girls that they invite to join them. This sparks the media frenzy. Emily’s blog also goes crazy as girls from around the country anonymously begin to come forward to tell of the sexual assaults against them, and find her site to be a safe place. The good that came from the bad.

As I said the first half of the movie, perhaps a little less, is too much like so many other movies out there of the same general genre; mostly it’s Mean Girls with an Occult twist. Lies, rumors, horrible accusations and scandals fly and it is just very reminiscent of the aforementioned movie only darker. This is really unfortunate as I think some people will lose interest during this phase of the movie and never get to the see the amazing story that unfolds from a rehashed cocoon.

The characters are very nicely defined however, and are certainly not cardboard cutouts of reused material. Even Emily, who fits the role of the vindictive and petty one turns out to be a solid character in which we can actually invest ourselves. This is the saving grace of the first 30 to 45 minutes, as the lead characters are very

interesting in and of themselves and can give us something to hold on to through the identity crisis the movie is having. The acting is solid, and Georgie Henley (Mary), Willa Cuthrell (Catherine), Olivia DeJonge (Lavinia), and Kara Hayward (Emily) give a strong and commanding performance that makes you take notice. It would have been extremely easy for the the writing and the actors to overplay and try to oversell the characters, but they avoid this and land an excellent balance. It makes each of the girls feel very real and unique, and not a blur of all being the same type of people since they are members of The Sisterhood. The writing in general here is exemplary and even in the roughest parts holds together well. I would also like to note that it was nice that the adults were not clueless idiots as would normally be the role given them when telling a story from a set of teenagers point of view, but were real people (some clueless but in a real way).

Initially the movie takes itself far, far too seriously even for the heavy tone it carries. There are way too many slow motion shots and filler scenery, as if there was some need to drive home the depth and poignancy of the story through dragging it out as long as possible by slowing everything down. What this actually does is bog down the first half hour, and in fact when I had to pause to get a drink I was amazed that only 30 minutes had passed as it felt more like an hour. I remember thinking what could they possible put in the next hour and fifteen minutes that won’t feel like dredging through the mud. Fortunately the last hour takes a sudden turn and most of the slow motion and feet dragging disappear and a real story emerges. It was almost like they changed directors mid filming and suddenly we got a whole new movie, but they didn’t want to re-shoot the beginning and so kept it. Whatever the reason we got a much stronger movie.

The ending to The Sisterhood of Night was perfect, it was beautiful, and it concluded with such a strength that I would never have seen coming in the beginning. The ending actually starts about 20 minutes before the credits role, and from there it is pretty much a wrap up of the story, but not in a we’ve got a mess of plot lines to clean up so lets take all kinds time to do it, but more of a reveal and a progressive conclusion

stemming from it. If Anguish was the movie that made me jump, The Sisterhood of Night is the movie that made me cry. By time I had reached the last 20 minutes in the movie I was in love with all the characters, and felt all the things they felt. The narrative let me understand what they were going through, not on an intellectual level, but on an emotional one. It let me see the world through the eyes of  young women who were lost and alone and just needed a safe place, need someones “vow of silence”. What The Sisterhood turns out to be is nothing scary, and nothing even all that shocking, but still it was amazing. In the last five minutes it was all I could do to hold back the tears, mostly of joy but some of sadness too. The ending was relieving, freeing and done in a tone that echoed a bit like the ending of Fight Club, except it wasn’t a new beginning, just a vow. 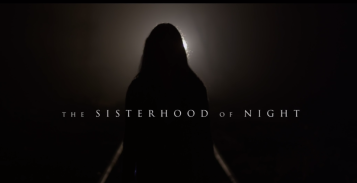 I wish that I could write more about The Sisterhood of Night, but I feel like I’d be giving too much away. This is a must watch movie, just be patient with the beginning and know that where it starts is simply the surface, an icy one where it’s hard to get traction. Once it does however, you will be greatly rewarded with an experience you won’t soon forget.