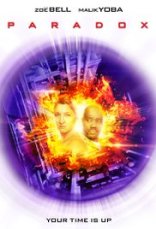 “Paradox really shines in the moments when it isn’t spouting ridiculous dialogue, coated with pseudo-science and large volumes of expletives. It is a fun ride trying to figure out who the killer is, why they are killing everyone and how this whole mess got set into motion. Where Paradox fails is that it [did have] it’s characters talk. Honestly, every 30 seconds someone was saying something…ridiculously asinine. [However], if you like science fiction, time travel, action and suspense rolled up with mystery, give Paradox a go. Just don’t hold you’re breath waiting for the paradox.” – 2.3/5 (genre)

I thought I’d jump out of the horror genre into a little Sci-Fi, suspense action, just to shake things up a little. So I landed on Paradox as I rather enjoy time travel shows and movies, and the horrid mess that most writers make of them (I think Continuum is the only show that got very close to being the most realistic way nature would deal with a paradox). I was really hoping for something like Time Lapse, which hopefully I’ll get to review soon as I’d like to watch it again. While this movie is all about time travel it really ends up being a great “who-done-it” sort of movie. Or at least it would have been great were not so bogged down with bad dialogue, mediocre acting and some of the worst special effects this side of made for T.V.

We start out with Randy (Michael Aaron Milligan) who has just jumped back in time and calls a Mr. Landau (Malik Yoba) to tell him not to come in to the facility or everyone will die. Mr. Landau doesn’t answer his phone however and apparently never got the

voicemail. Randy is quickly dispatched by a person in a hoodie (looks like one anyway) and wearing a gas mask. Initially Paradox boasts a fairly large cast as a group of scientists and engineers are working together with a known criminal, Mr. Landau, in a secret facility to produce a functioning time machine. As they all meet up outside the building at night, a few hours after Randy was killed, we get all of this explained to us by two NSA operatives who are sitting across the street in the most obvious, child abductor white van, and not even making an attempt to stay out of view. Here’s where it becomes clear why this would never have been a blockbuster. It was as if the NSA agent was reading off a check list of what the audience needed to know to get them up to speed about each character, and then that they had an operative inside. This felt so forced it was almost painful to watch.

Everyone heads inside and goes down an elevator which informs them they’ve arrived at Project 880, something Mr. Landau insisted on. There’s a lot going on here and a lot of people for the first 20 minutes or so, but the main focus is on Jim (Adam Huss), Gale (Zoe Bell), Lewis (Bjørn Alexander), and Mr. Landau. They proceed with the first

test of the time machine, with the change that Jim will be the first to go through, while Lewis is filming everything. Jim jumps an hour ahead to find bodies everywhere (really just one, and headless at that) and the self destruct for the machine active. There is a fair bit of gore here, probably a bit more than necessary but if you’ve seen any horror film or video game with blood in it there’s nothing new here. Jim finds Lewis dying, with the camera still in hand, who then gives him the camera because he’s supposed to. Just before the self-destruct Jim jumps back one hour and we begin the game of who is the killer.

Paradox really shines in the moments when it isn’t spouting ridiculous dialogue, coated with pseudo-science and large volumes of expletives. We jump from one person to the next as being the killer, in fact it seems to give it up right away which I thought was a great ploy when it took it back. It was satisfying to know that this was not going to be a simple we find the killer in 10 minutes and then try and stop them, and in fact the killer is never revealed until the last 20 minutes or so, though if you pay attention to some of the subtle cues you’ll have likely figured it out before. This 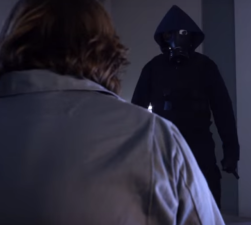 portion of the movie could have been done without the time travel in a simple Agatha Christie style novel (I am in no way comparing this movie with the writings of Agatha Christie which are excellent), but what keeps Paradox from falling into a simple slasher/thriller is the time travel element and figuring out who set things in motion. This becomes clear just moments after the killer is found out, but it was still a fun ride guessing who it could be once it became obvious that where the finger was pointing was wrong.

Where Paradox fails is that it had it’s characters talk. Honestly, every 30 seconds someone was saying something so ridiculously asinine it was enough to make me want to punch them. The best (or worst depending on your point of view) is when they actually draw the comparison between themselves and creating the time machine and the team that invented the atom bomb, assigning the same level of importance and

destruction to themselves. I thought for sure someone was going to bust out with a “I am become death” quote, since we’d already broke out Schrodinger’s cat. Their explanation of a paradox is so laughable I had to just ignore it to continue with the movie, and the fact that it was followed by “this stuff is really hard” comment from one of the main scientists made it all the more painful.

This isn’t to say there aren’t some funny lines of dialogue. When Jim comes back and tells them at midnight they’ll all be dead, Lewis breaks out with a “Worst spoiler ever!”. I got a good laugh out of that as it was one of the few jokes/puns that was genuinely funny. Also, “I’m only here because I was blowing bubbles.” by the security guard is pretty good too. Other than this, don’t expect much of anything from the script as it will let you down.

Paradox was all over the place in its genre placement, from thriller/slasher, to suspense and mystery, to science fiction; and this hoping about had a certain charm to it as it kept things somewhat fresh as it could have easily devolved into the normal stereotypical plot lines at any point. It walked that balance beam the entire movie, and though it was successful for most it really fell on its face with the attempted

romantic intrigue between Jim and Gale. So much of this was unnecessary filler, adding extra minutes to the movie to bridge the gap between action scenes to give us a breather I suppose, but instead it just left me antsy and wanting to move on because the killer wasn’t going to be found out if we’re standing around in the hall talking about our feelings (with dead bodies about I should add) as if it were a typical day in their house.

Possibly one of the most infuriating things about this movie is that, and brace yourself for this minor spoiler, there is no paradox!  Wait, what? No surely a movie called paradox and involving time travel would have some kind of paradox to resolve. Nope. What we get is the constant extolling of the inevitability of fate and that there can never be any paradoxes because “you gotta do what you gotta do”, to quote Futurama. The movie makes a long winded attempt to pass off its view of time, time

travel and the way in which nature would deal with a paradox, in this case by simply not allowing there to be one. Legacy of Kain: Soul Reaver 2 this is not. You want a story about paradoxes that is the story to watch because “Nature abhors a paradox”. I wonder if that means it also abhors a movie named Paradox? That question seems cyclical, at least more so than the movie. It was one driving force, on rails linear sequence of events leading up to the person who set it all in motion to do so again. That’s not a paradox, that’s just basic time travel rules.

While this style of dealing with time travel, or knowing the future is similar to Time Lapse, it isn’t quite the same. Time Lapse knew where it was going when it started out and just added some fun twists to get there. Paradox blatantly sells itself as a time traveling mixed up mess when in reality it’s a pretty straight (yet curvy) forward story. This actually feels reminiscent of 12 Monkeys (the new show, I have yet to see the movie believe it or not), but it wasn’t quite as fun getting there.

So where does that leave us? Funnily enough, it leaves us, or at least me, in somewhat of a paradox (someone should really slap me for that one). It is a fun ride trying to figure out who the killer is, why they are killing everyone and how this whole mess got 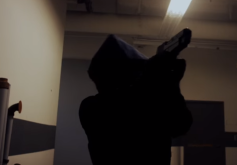 set into motion. There was such huge potential in this plot line that I was really pulling for the movie the whole way. So on one hand I loved it and found it satisfying, both in the story elements and the ending, which while obvious was still good. On the other hand, it was probably one of the worst written movies in the science fiction genre (and that’s saying a lot) that I have seen in quite some time. Essentially the dialogue dragged down what could have been a really great movie. The acting didn’t help the writing either, it just exacerbated the problem by delivering poor dialogue with poor acting.

I would have to say that if you like science fiction, time travel, action and suspense rolled up with mystery, give Paradox a go. Just don’t hold your breath waiting for  the paradox. It isn’t going to knock your socks off or make your head spin from all the loops and jumps of logic, but it can make a nice late evening movie. If your not into these things, dislike any gore at all, or just can’t deal with bad writing and acting, maybe pass this one by. I’d say this one could go either way.