“Pandemic is a shaky roller coaster, FPS style, zombie apocalypse ride. It is a seamless flow from start to finish on what begins as a singular directed story and evolves into something much more emotionally intense. The forced first person perspective is just plain awful, especially when you throw in the more contrived shots to give us a wider perspective. But through all of that there is good solid story about a mother and her daughter, however brief that daughter may appear on screen, which leads us to find greater character depth from our main cast than would be expected for this type of film. Pandemic is solid, and a good watch. Just be aware, it is a zombie movie so there will be blood, lots of blood.” – 3.4/5 (genre)

It’s been a while since I’ve watched a good zombie movie, I think Contracted being the last one, so I went into Pandemic with high hopes. They bolstered even more by the fact that the lead was Rachel Nichols (Dr. Lauren Chase), who played Kiera Cameron in the series Continuum, a show I very much liked (and incidentally has the closest ideas

to my own on how time travel paradox’s would be dealt with). I would like to say that this was a great movie, but it wasn’t. It was however, a good movie with lots of action sequences, as you would expect in a zombie movie, as well as moments of near introspection and character depth.

The basic premise is pretty much what you can see in any number of zombie outbreak movies that have enjoyed the zombie renaissance, a virus broke out that began killing people rapidly, the military was forced into creating safe zones, and the search for survivors and a cure was on. And that’s it. Well not really, like I said there was a great deal character building for such an action oriented movie.

Dr. Lauren Chase (Rachel Nichols) is a former technician from the CDC who was in New York City before it “fell”, and has now arrived in L.A. in one of the last remaining safe zones. She’s on site to help find, identify, and rescue survivors in the L.A. area and bring them back to the safe zone. The movie begins with pictures and home video of Lauren and her family, focusing on her daughter Megan. The movies are cut short as we break to Dr. Chase and the subsequent run down of events given to us by Dr. Greer at the LA safe zone.

Apparently, at this point, most people were unaware of the final stages of the infection. This is one of the aspects I really liked about Pandemic, that infection was broken up into five levels (only four of which most people knew of).

Level 1 was flu like symptoms, Level 2 was internal hemorrhaging and disorientation, Level 3 was sever brain damage from the internal bleeding, and Level 4 was what appeared to be death. As it turns out it is some kind of hibernating state that the infected go into before emerging into Level 5’s, zombies we know and love. These aren’t The Walking Dead’s zombies but more like 28 Days Later zombies, fast moving, aggressive and it would seem more prone to moving at night, though this isn’t really explained or delved into at all. As best I can figure, this is really more a

plot device to push later events forward without it breaking any established canon within the movie’s universe. I did particularly like the fact that at each stage there were varying levels of consciousness and it seemed that the people on the outside that were infected but in early stages were already beginning to show signs of being zombies, but it was a slow progression. There was even a treatment for Level 1, although it was reserved for the most important of people and not those left to wander the streets with the gangs and the zombies. I should mention I don’t believe the word zombie is ever used in the movie, instead favoring the infected.

Dr. Chase is sent out with team 314 to rescue a group of people and a doctor from a high school in the downtown area, which was safer than the suburbs where it was stated a large number of Level 5’s “lived”. Each team was comprised of four people: the doctor, Chase (Rachel Nichols), the gunner never even billed with a name, just Gunner (Mekhi Phifer), the driver Wheeler (Alfie Allen), 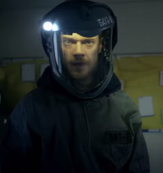 and the navigator Denise (Missi Pyle). They head out in a school bus and we get our first look at the world outside, with early stage infected and uninfected outside the gates trying to get him and being killed the same regardless so the bus can get out.

The character development among these four primary characters is actually quite good for a movie of this type, as we learn different things about each of them as the movie progresses, and we are even surprised by a couple of them. At first it seems they’re all hardened jackasses (from Lauren’s perspective), but as we move along the real people

behind the characters begin to emerge and there are some really satisfying moments of interplay between them. Each of the actors did a really good job in their respective roles, and were quite believable, with their interactions among each other evolving natural and dynamically. This is a testament to good acting raising decent writing up, not that the writing is particularly bad, but the actors raised it up above the deluge of typical zombie fare we’ve become used to and managed to add a quite convincing human component to the movie that would seem impossible in the time frame available. Needless to say we lose some along the way, and to its credit the movie made me care about the fact that we lost them, with Gunner being the only real cliche “I’m a hero go on without me type”, and even that would really be a stretch, as I don’t think that’s what he really felt after finding team 313. So I would say well done movie.

So where exactly did Pandemic go wrong. For me, despite all the other things I’ve said about it, it went wrong around two to three minutes in. The story is told through the view of cameras, most mounted on the bio hazard suits that the teams are wearing, which gives us a first person view of the events happening, switching back and forth

between cameras as necessary. This was just awful for me, I dislike FPS games, and this whole movie felt like it was one long FPS, right down to the hand and weapon out in front of the camera like self driven, disembodied entities. I will grant that there were certain moments that couldn’t have given the sense of tenseness were it done from a third person point of view, but these were so few and far between I would have gladly traded them in for a more “standard” view. Most of the time it was shaky and disorienting, like riding those “octopus” roller coaster rides at amusement parks. It felt like it detracted so much from the movie that it actually brought down what was otherwise a fun and intriguing story set in a post-apocalyptic world (words I’m sure most of us are getting tired of seeing when attached to a movie or book).

The secondary problem with this type of filming choice is the loss of other views to show what is happening. There are times where the first person view, no matter who i 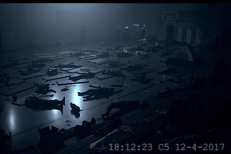 t’s coming from in the movie, isn’t enough to let us know what is happening, which drives the director to throw in extremely contrived shots. The least of these are the quick views from supposedly still functioning security cameras, but there is no electricity so how are these cameras still functioning, and who’s perspective are we viewing them through? Who’s left to watch them? But this is minimal compared to some of the more forced shots interspersed throughout. The first is the sudden break from seeing things only through a camera to getting a shot where there is obviously no camera, an object maybe so I guess we’re seeing things from an inanimate objects point of view. The worst is probably when Wheeler is in the ambulance outside Lauren’s house, he has no suit, no camera and yet we get a shot of him inside the ambulance as well as an outside shot of the zombies approaching him. No where is there a camera to cover this, and were the movie not forced to this perspective for 99% of its run it wouldn’t have been that noticeable. The other problem is when Lauren is holding a blood test with her helmet sat in front of her looking at her. She can see the blood test result but we can’t, we can of course infer the results from her expression, but she’s forced to turn the disc over so we can see the results, as if she were looking at the backside of it which contains no information what-so-ever. This is of course an artifact of the forced perspective.

To be honest, this is the only really strong complaint I have about the movie (there are some minor things like always) but it’s such a big one that it really hurt the movie for me. Fortunately, the ending was done in a way that made use of this perspective to strong dramatic effect, and was the only time I felt like the first person view was completely appropriate. To be honest I was concerned 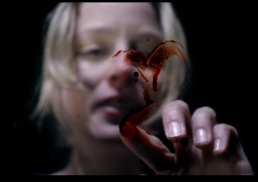 where the movie was going to go after just 30 minutes, I didn’t think it had the staying power to go another hour, but just about that time the true story breaks through. This isn’t about an apocalypse, or a virus or even zombies, it’s really about a mother in search of her daughter. And this brings us to a wonderful ending. I know some will disagree with me about that, because it isn’t a happy ending or even one that would set well with many a viewer, but it is a much more realistic, if depressing, ending. And believe it or not I was impressed by how the movie came to an end, not because it was wholly original, but that it actually moved me. I watch zombie movies because they give you jump scares and intense moments, it was nice to find a moment of intensity of an emotional nature hidden in the last seconds of the film. I think any other ending than what we got would have been wrong, this one was right, and I can’t say that often about the movies I watch.

Pandemic is a shaky roller coaster, FPS style, zombie apocalypse ride. It is a seamless flow from start to finish on what begins as a singular directed story and evolves into something much more emotionally intense. The forced first person perspective is just plain awful, especially when you throw in the more contrived shots to give us a wider perspective. But through all of that there is good solid story about a mother and her daughter, however brief that daughter may appear on screen, which leads us to find greater character depth from our main cast than would be expected for this type of film. Pandemic is solid, and a good watch. Just be aware, it is a zombie movie so there will be blood, lots of blood.