Ranking up the Merc.

So this is really only tangentially related to my mythic progress (as I need to reach captain rank), but I thought I’d throw this in here.  So last night Frixt and I ran the rank up quest for Corporal.  We had to find and place a quartz transmitter in the Warhorse hoof-print.  Simple enough, but what ended up happening was a large scale running of Aht Urgahn areas, and some unintended sightseeing.  I actually came across a couple of sights I hadn’t seen before (odd since I’ve been playing for 8 years or so).  While Frixt searched Wajaom Woodlands I searched Bhaflau Thickets first. 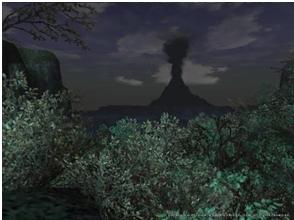 Mt. Zhayolm in the distance. Somehow I had missed this little corner of Bhaflau Thickets, and the view that comes with it.

Success! Although I think that Dahak wasn’t happy about us invading his island Kingdom, so we hauled out of there.

Once it became obvious that the hoof-print wasn’t in the thickets I moved on to Mount Zhayolm, and after a fair bit of running (killing my taru legs) found the hoof-print, but again in an area I hadn’t actually visited before.  Vana’diel is a pretty big and awesome place.  Of course I had to guide Frixt to the location (I am the navigator of our duo) which took some time as she was still in Wajaom I think.  However, she did get there and we got the quest completed.

Afterwards we went with our LS (Imperfect Harmonies) to aby to do Ulhuadshi.  Unfortunately we spent so much time the first two fights watching our pets kill him that we all fell into a coma and I didn’t get any LS pictures of the event.  After we came out of the pet induced coma we changed up jobs and went at him again, this time determined to do it faster.  Indeed, those two fights went much faster (Mal and Dobril completely wrecking him) and plenty of good drops came with it.  So overall it was a rather productive evening.  (^.^)b

Pictures of the LS to come soon.